Cyclades building land Folegrandos in the southern Cyclades. The land, on the edge of the small village of Ano Meria, has breathtaking sea and mountain views and comprises 5,150 s.m. with the benefit of a building permit.

The land is approached by a surfaced road from Ano Meria and then for the last 100 metres an agricultural road leads to the boundaries of the land. the electricity supply is available within 30 metres from the boundary and a water supply can be arranged from the local authority. The nearest beach is sandy and is a 10m minute drive away.

The building permit allows residential development of 150 s.m. plus a basement of a further 150 s.m

THE VILLAGE OF ANO MERIA

Ano Meria is one of the three main villages on the island and has a population of some 765 people. It has a bakery, mini market, tavernas, chemist and medical facilities. Set amidst magnificent unspoilt scenery, the peace and quiet of traditional island life remains undisturbed by discos, noisy nightlife, watersports and organised beaches. The pleasures are old fashioned and traditional, with good tavernas and cafes, the scent of herbs and colourful wild flowers in the spring.

Until 2005 Folegrandos was without a recognisable ferry service. Even now over ten years later there are only three sailing per week from Athens, out of season. The additional summer ferry services vary and may be from a nearby larger island. Package tourism does not exist and the mobile phone reception may be patchy at times.

Folegrandos is in a secluded part of the Aegean Sea and  proudly boasts of its simplicity, isolation and character as being amongst its greatest strengths and attractions 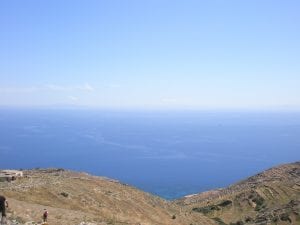 The Cyclades is one of the best known group of islands in Greece, and with 220 islands it is certainly one of the largest. Some of them are recognised as being the most beautiful islands in the world. The white cubist houses with blue doors and shutters have given the world a renowned style of architecture.

For these and many other reasons building land in the Cyclades has proved to be a sound investment.