Saronida ground floor apartment was originally built in 1979. It has been well maintained and cared for and is in good habitable condition. It would now benefit from some modernisation and upgrading. This could be carried out at minimum cost which it is expected need not exceed more than 7,000 Euro.

The original room lay out provided for one large bedroom which has been converted into two. A full height dividing wall could easily make this a permanent arrangement.

The patio is a substantial area of some 30 sm at the front of the property. It adds nearly 50% to the internal size of the apartment and can be used for much of the year as an additional living room. It is bordered by colourful shrubbery.  Hedging and a large boundary tree provide shade and privacy in an area which is noted for peace and quiet. 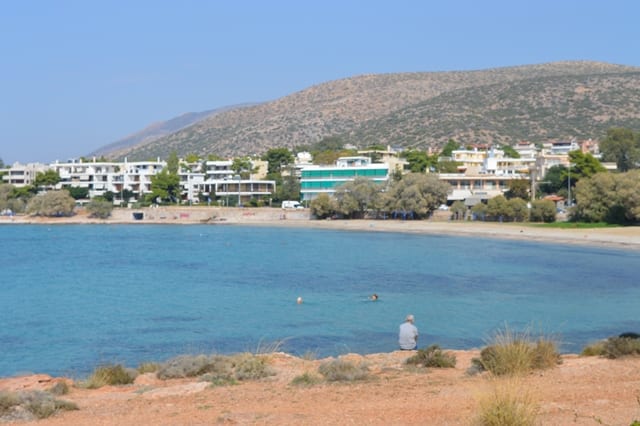 Saronida is a small seaside resort  on the Athenian Riviera which stretches down the coast from Glyfada. Beautiful sandy bays and rocky coves abound. It is noted for the quality of its plentiful waterfront cafes and tavernas.

SARONIDA – LIFE ON THE ATHENIAN RIVIERA

Athenian and foreign buyers provide constant demand for apartments along the Riviera coast. Saronida is a popular destination for tourists who prefer private rented accomodation.  Apartments in Saronida are recognised for their income producing abilities as holiday rental accommodation.

At the same time Athenians themselves buy their own  homes either as permanent residences  or as summer holiday homes.