Beachfront building land with forest near Loutraki on the Gulf of Corinth. The land is at Milokopi, outside Loutraki which is on the north coast of the Gulf  The land comprises 130,000 s.m. fronting on to a secluded bay with crystal clear waters and two beautiful sandy beaches on this exclusive coastline.

103,000 s.m. of the land has been classified as private forest, whilst on the remaining 27,000 s.m., development of up to 26,000 s.m. is permitted, This can be either commercial development for tourism or a magnificent private residence. The bay is also suitable for a small private marina. A road leads to the top boundary of the land and then continues as a private road, within the boundaries, down to the beach

The land is in a secluded location where privacy can be gauranteed ideal for luxury development for those who can appreciate nature and beautiful scenery.

Perachora is 7 kms north west of Loutraki, in the foothills of the Geraneia mountains and 2 kms from Milokopi. Shops and other local amenities are available in Perachora.

The coastline is superb, with numerous coves and beaches for swimming and the finishing touches are added by the mountainous hinterland which in winter has some of the best skiing in Greece.

Loutraki is a cosmopolitan resort town on the shores of the Gulf of Corinth. It has become noted for its spa waters and modern thermal baths, as well as its club casino and  modern hospital facilities. There are numerous classical sites near to Loutraki and the ruins of Ancient Corinth founded some 5,000 years ago are only a short drive away.

Loutraki is 110 kms by motorway from Athens airport and also has an express bus service from the centre of Athens which takes 1hr. 15 mins. 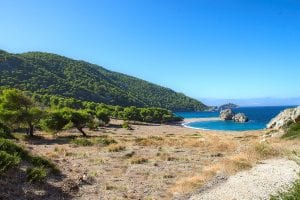