Seaside holiday studios Tyros nestle on the hillside overlooking this picturesque harbour in the eastern Peloponnese.

The studios provide a regular income and comprise seven letting rooms, each with their own bathroom and balcony. One room is used as a kitchen and there are two further ground floor rooms which require completion. These could be used as common areas such as a reception area and lounge. The property is also suitable for conversion into a small hotel.

A pathway leads  directly down to the harbour and the promenade, with the sea, only 50m away. Whilst this is a public path, it is used only by two properties. There is also road access to the rear of the building

Built in 1980, the property, which enjoys panoramic sea and mountain views, is set on a plot of 300 sm. and provides 288sm. of accommodation;

The property has small garden areas amounting to 156 s.m.
All furnishings are included in the sale price 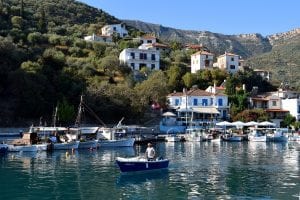 Tyros is a traditional fishing village on the east coast of the Peloponnese which now attracts tourists in search of the old traditional Greece and there is now a shortage of both rental and hotel accommodation. As well as swimming and fishing it is also an ideal centre for hiking and mountain biking.

There is a regular daily bus service to Athens. Leonideon is 14 kms to the south.

The Peloponnese is one of the last and one of the most beautiful unspoilt mountain regions in Europe. It stretches from the southern shores of the Gulf of Corinth in the north, to Kalamata  in the south. It is home to many of the sites of ancient Greece, including Ancient Corinth, Olympia, birthplace of the Olympic Games and Mycenae, with its world famous Lion Gate. The coastal scenery of bays and beaches is breathtaking.