Mani Kardamili; building land & new villa for sale above Kardamili in the southern Peloponnese and including a villa with building permission for further development of up to 220 s.m.

The property is located on the edge of the historic village of Agia Sofia and enjoys some of the most stunning views on the Mani coastline. Lying at the head of and overlooking a V shaped gorge, it has uninterrupted views over Kardamyli and across Messinian Bay with spectacular sunsets.

The gorge is a listed bird sanctuary and part of it is also under Forestry Department administration, which means that no further building can take place to interfere with the panoramic views from the land. Because of its ancient church Agia Sofia has been listed as a protected village

To the rear are the Taygetos mountains, often snow capped in winter.

The land is less than a 10 minute drive (3 kms) from Kardamili and the sea. There is also a path to Kardamyli takes 20 minutes on foot.

The area is popular with tourists and attracts walkers and mountain bikers throughout the year. It is also steeped in the history of classical Greece with the tombs of Castor & Polux, the twin sons of Helen of Troy, reputedly situated in the gorge, within walking distance of the property.

Along the coast are a number of swimming beaches.

In Kardamili and in nearby Stoupa, there is a range of shops, bars, tavernas, coffee shops and supermarkets and excellent sandy beaches.. 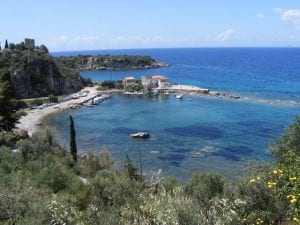 Kalamata, the regional capital has an airport serving international destinations in Europe,  as well as a large modern marina and a long beachfront promenade. By road to Athens  takes about 2.5 to 3 hours and is by motorway all the way. An express bus service to Athens operates daily from Kalamata.