Agios Nikolaos building land in Mani located between the two small fishing villages of Agios Nicholaos and Agios Dimitrios in the beautiful Mani region of the Peloponnese.

The land which is at present an olive grove on the edge of the village of Kato Riglia, is level and has some 30 olive trees. Water and electricity services are available within a few metres. Access to the plot is by a surfaced agriculturual road a short distance from the road to Agios Nickolaos.

The plot is some 500 metres from the nearest beach.  It enjoys mountain views and from the first floor of a a house built on the plot, there would also be a sea view.

It is permitted to build a villa of up to 180 sq.m. on the land.
There are a number of swimming beaches along this stretch of coast, backed by the magnificent Taygetos mountains, which are often snow capped in winter. Small villages, with traditional tavernas, nestle in the mountains and on the coast there is the larger resort of Stoupa with its sandy beaches, as well as Agios Nickolaos with its waterside tavernas, lining the harbour.

It is only a short drive along the main road, to Agios Nikolaos, an attractive and unspoilt  fishing village, where the harbour is lined with water front tavernas, cafes and bars and there are also mini markets and a pharmacy.  Pantazi beach which is close to the plot is popular with swimmers and sunbathers. Along the coast to Stoupa and beyond there are a number of beaches, quiet bays and inlets which are ideal for a relaxing swim, as well as the two larger sandy beaches at Stoupa itself. 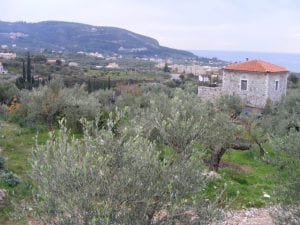 Mani is an area of outstanding natural beauty with magnificent coastal and mountain scenery and breathtaking sunsets. It is popular with walkers and cyclists, as well as with family holidaymakers and it attracts visitors throughout the year. Generally the winters are considerably warmer than in many parts of Greece and there are many warm sunny days even in the depths of winter.

The regional capital of Kalamata which has an airport serving many European destinations during the season, is approximately a one hour drive away and from Kalamata there is also a modern motorway network to Athens.  The drive through the mountains of the Peloponnese to Corinth and thence to Athens airport takes only about 2 1/2 hours. To Patras from where there are ferries to Italy, is mostly by new motorway.