4 bedroom Mani villa includes a large one bedroom independent apartment. Neochori is a 5 minute drive from Agios Nikolaos and the sandy beaches of Stoupa. The villa has extensive sea views and to the rear majestic mountains.

Set in it’s own grounds the 4 bedroom Mani villa has been carefully looked after by it’s present owners.

Sited at the end of a cul de sac the gated entrance leads to a large parking area which can accommodate up to five cars.

Outside steps lead to the main living area which offers a fully fitted kitchen and dining area.  A large lounge with an open fireplace  is fitted with a top of the range wood burner with a glass door.

With lots of windows it is really light and airy.

There are two double bedrooms, both with fitted wardrobes and a third single bedroom, currently used as an office.

The large bathroom has a separate shower and also houses the washing machine.

The ground floor has a large a separate one bedroom apartment with its own entrance. The apartment includes  a fitted kitchen with dining area and a shower room. The living space is currently separated by units,  making it easily able to sleep four people. It provides complete independence.

Built in 2008 by the current owners and offering aluminium shutters with mosquito nets, solar power for all your hot water and oil fired central heating and a spare water tank this home has everything you could possibly need for all round living.

There are great garden areas to the front and rear of the property and also a Jacuzzi to the side, again with great views, ideal for sitting with a glass of wine and watching the sun go down.

Selling partly furnished, this large home is offered at a good price and offers good value for money. 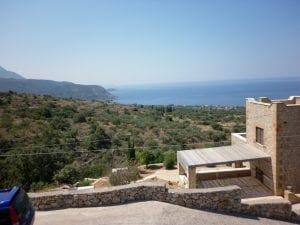 The nearest shopping facilities are in Neohori with bakeries, tavernas and a bar. Stoupa which is a 5 minute drive away has further shopping facilities, including 2 large supermarkets and a chemist. Beachfront bars and tavernas line the waterfront. At Stoupa and Kalogria there are two excellent sandy beaches, Within a 10 mintue drive from the house, there are 3 harbours. The area also abounds in small coves and quiet bays.